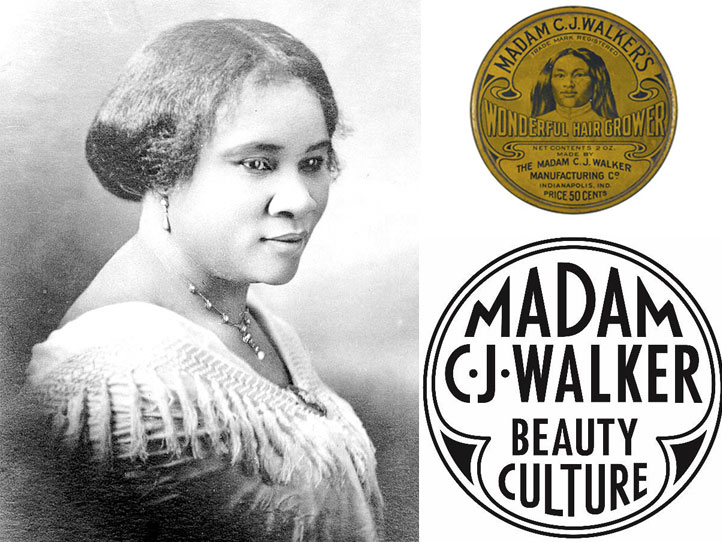 Sarah Breedlove was born in 1867in Delta, a Madison parish village. Her parents were former slaves and she is the first child born after the emancipation. After losing her parents, she moved to Vicksburg, Mississippi with her older sister. At the age of fourteen, she married a worker called Moses McWilliams who died in 1887. Even though she had no professional training, the young lady needed to support her two-year-old daughter Lelia. She moved up the Mississippi river and settled in Saint Louis, Missouri where she worked as a washerwoman while taking evening classes. Her brothers Alexander, James and Solomon were working there as barbers. She went to St Paul’s Methodist church, which allowed her to befriend black local socialites.

In the 1890’s, she started to suffer from a skull disease which lead to losing all of her hair. No matter which products she used, nothing could stop her hair from falling. She was ashamed and prayed for a solution. The idea appeared to her in a dream : she had to create a product with ingredients from Africa mixed with sulde and petroleum. When she applied the mixture, her hair started growing back quicker than they had fallen. She was so happy with the results that she decided to develop her vegetable shampoo.

In 1905, Sarah moved to Denver and got married for the third time with Charles Joseph C . J. Walker, a St Louis journalist. After changing her name to Mrs C. J. Walker, she started her own business whose first production was made in her kitchen. And she started selling her Wonder Hair Grower by Madam Walker. Madam Walker did not invent the straightening comb or chemical perm, contrary to what many believe.

FROM ENTHUSIASM TO SUCCESS

She was so proud of the extraordinary results that she started sharing her mix with other people affected with similar diseases.
In 1906, Madam Walker starts travelling around the United States and the Caribbean in a dizzying crusade to promote her new hair care products. She went door to door and visited churches. Then she settled in Pittsburgh in 1908 and opened her Lelia University Beauty School to teach women to become sales representative and thus gain nancial independence. Two years later, she settled in Indianapolis and built the biggest factory in the country, a nail salon and a school.

“I have made more and more room for skull and hair care products. After using it on myself and on others for a year, I was conviced of its merits then,  I started travelling and making it available for thousands of people in Denver, Colorado where I settled” she said in a 1911 pamphlet.

1917 is a turning point. Madam Walker invites all her “Beauty Culturists” at a Philadelphia convention. Over 200 women gather to learn more about sales and marketing. It is one of the rst national businesswomen meeting in the country. C. J. Walker gave awards and money to the women who had most contributed to charity in their community to encourage their political activities.

THE LIGHT OF SUCCESS

Perseverance and dedication, faith in herself and in God, quaity products and honest business relations : those were all the key elements and strategies she taught to aspiring entrepreneurs who wished to know the secret to her wealth.

Madam C. J. Walker died from hypertension on 25th May, 1919 at the age of 51 in her personal family residence in Irvington-on-Hudson, New York. When she died, Walker was the sole owner of her million-dollar company. Her personal wealth stood between $600.000 and $700.000.

Today, Madam C. J. Walker is widely known as one of the rst African American woman to become a millionaire, a philan- thropist and a social and political activist.