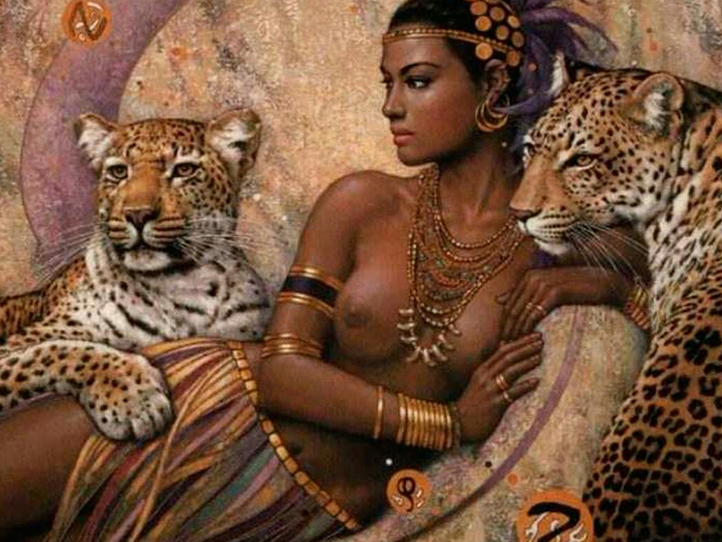 Powerful women are often sources for inspiration, that is why I wish to dedicate this article to three great African queens ;  fascinating in their sense of mystique and seduction. I chose to analyze their legendary beauty, well-being rituals and beauty secrets…

THE QUEEN OF SHEBA: LOVE AND BEAUTY
She was a woman with exotic powers. A mysterious queen immortalized in the great Biblical, Koranic and Hebraic sources as having ruled the kingdom of Sheba that supposedly stretched from Yemen to Northern Ethiopia and Eritrea around 1,000 AD.
Warmly welcomed by King Solomon, she gave birth to a son named Baina-Lehkem (son of wisdom) who will later be called Menelik I.

How did she bewitch dear Solomon? No more secrets, I will tell you everything!
To maintain her mythical black beauty, the Queen of Sheba used to take mud baths, enriched in trace elements and used clay masks to perverse her skin’s youth.
This also made her skin very soft. How do you resist baby skin? You can’t!

NEFERTITI: THE DIY SCOUT
Pharaoh Akhenaten’s main wife (14th century BC) was the most frequently represented beauty queen in the reliefs discovered in the Karnak Temple. The beautiful Egyptian queen would coat herself with butter extracted from shea tree (with extraordinary soothing properties) when she would come out of her rose petals bath. One again: highway to soft skin!
As a DIY (Do It Yourself) supporter, the Egyptian Queen liked to make her own cosmetics. She often mixed asses’ milk with crocodile manure to make masks, and also made her own eyeliner mix with lead-based kohl and clay.

CLEOPATRA: THE CHARMING FEMME FATALE
She was the last Queen of Egypt (69-30 BC) famous for her relationship with Julius Caesar and Mark Antony with both of whom she had several children. She would fascinate men with her kohl eye makeup and blue/aqua eye shadow (which she made by smashing malachite, a copper-based mineral) that would protect her from microbial infections caused by the wind and the sand, and also make her eyes looks wider. She would maintain her soft skin by waxing with oriental wax (water, honey, sugar and lemon) and taking asses’ milk baths, which are known for their energizing, anti-ageing soothing and restoring properties thanks to its mineral salts, fatty acids and essential vitamins. Legend has it that Cleopatra had her own 700-asses ock.