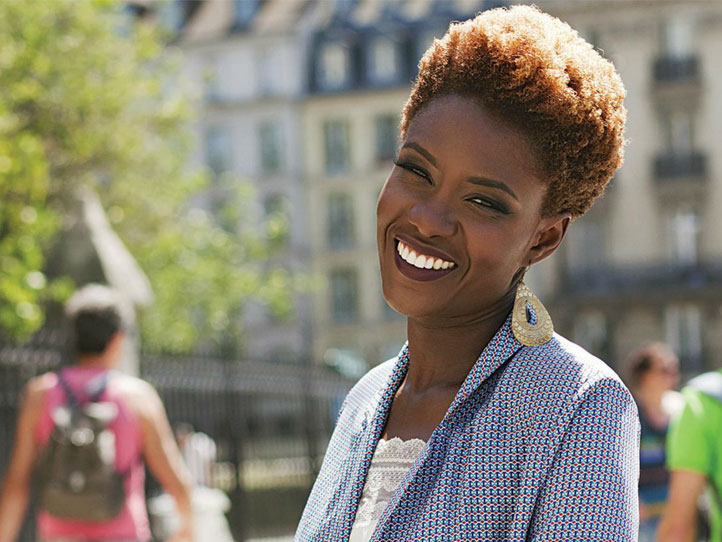 As she introduces herself in her TEDx Talk Conference (www.ted.com), Rokhaya Diallo is a TCK (Third Culture Kid): a child who was raised within a culture that is not her parents’. Rokhaya is a bold and authentic woman who wants to make things change.

As a French journalist, writer and director, Rokhaya Diallo is often mostly defined by the audience as a black woman. As a matter of fact, she even hosts shows on the French BET channel.

Yes, her sociological research revolves mainly around equality issues (racial, sexual, religious, etc.) But in this very world of image where skin color remains an essential feature of how we perceive others, the journalists wants to raise discussions around the new metis identities. Though ethnic statistics are still forbidden in France, you only have to take one look at the other country’s figures to understand that as time goes by, as globalization grows, we mingle more and more. Cultural diversity is an inevitable consequence of our globalized 21st century.

Rokhaya Diallo has always been fascinated by those essential social issues. On the radio, on television and in documentaries, she keeps raising those questions about identity and multiculturalism. In order to have a more specific idea of what her work is about, you can simply look at her bibliography: “La France Une et Multiculturelle” (One and Multicultural France), Fayard, “À nous la France” (Our France), Michel Lafon, “Comment parler de racisme aux enfants” (How to talk to our children about racism), Le Baron Perché. The author has also contributed to a comic book with “Pari(s) d’Amies”, Delcourt. Her documentary “De Paris à Ferguson, coupables d’être noirs” (From Paris to Ferguson:guilty of being black) deals with the ideas conveyed by this new generation of Afro-American activists born with the latest police violence waves, in the United States and around the world.

During the Afro! exhibition that took place in the end of 2017 at the Paris Maison des Métallos (www.maisondesmetallos. paris), Rokhaya Diallo and the author, photographer and illustrator Brigitte Sombié tackled ethnic mix through the Nappy trend. During these interviews, encounters, pictures and testimonies, black and metis Parisian women spoke about their multiple identities and their will to assert themselves as individuals. If some were born in, or have soon adopted, French culture, their relation to the African continent is necessarily inscribed on their physical appearance. Rather than trying to erase this difference, these women have decided to embrace it by standing for it completely. It is about highlighting our differences in order to understand each other better and realize that there are as many boxes as individuals.
The exhibition gave birth to a beautiful eponymous book cowritten by its two designers, Diallo and Sombié.

In 2017, Rokhaya Diallo also launches her blog RokMyWorld (www.rokmyworld.fr) where you can find her latest news and thoughts on a diverse world and her hopes for tolerant diversity. The journalist was also one of the 500 leaders invited to the first Obama Foundation Summit in Chicago gathering 400 Americans and 100 internationals from 60 countries. She was the only French person to be invited! Nice job!